There are so many gorgeous places to hike in Cape Town. Last Friday morning while Rob was at work, a few friends and I hiked the Noordhoek Peak Circuit in an area called Silvermine. Silvermine is part of Table Mountain National Park. There is a reservoir right at the start of the hike that would have been a great place to have a picnic if we would have thought to bring some lunch! There was a small group of women and kids ahead of us with swimsuits and pool floaties – they were ready for some water fun! For me, its still a little too cold for swimming this time of year in Cape Town, but kids don’t seem to mind the cold so much. Maybe I’m just a little wannie pants, but I don’t ever like to freeze my buns off. 🙂

Before we began the hike there were lots of signs that warned of baboons, but we didn’t see a single one. Although, they can be vicious little creatures. I was not the least bit disappointed we didn’t run into one.

A gradual climb began just after the reservoir and curved up and up around the mountain. Some of us feeling a little out of breath, we took a little break to go explore the first lookout point. We turned around to look and found that we could see ocean on either side of the mountain. It was a beautiful view! We continued to climb and climb around the mountain. We kept thinking the summit was going to be beyond the next curve, then the next curve, but over and over we were wrong. Each time there was a lookout point we took time to slow down, walk out to the lookout, and really enjoy the scenery. The last lookout we ventured out to I expected the view to be much like the previous two we had seen, but it was nothing like them and was by far my favorite. Looking out over the edge of the cliff we could see all of Hout Bay, the surrounding mountains, and seal island. The view was gorgeous! For such an amazing view, the lack of physical struggle to reach the summit was surprising. I loved every minute of this hike; especially the company!

What a perfect day for a hike. I am so grateful for awesome friends who love to hike, drink milkshakes, and have adventures just as much as I do! 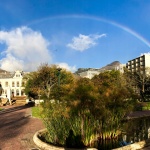 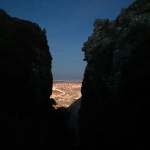