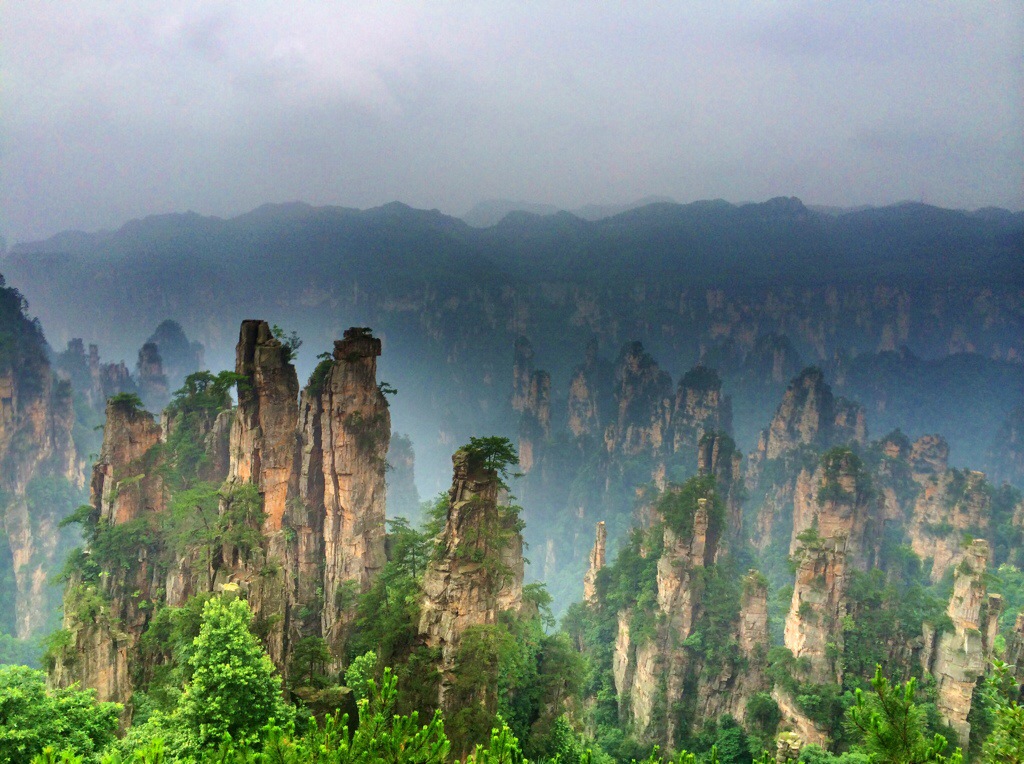 First off this was probably one of the coolest places I have been here in China. The rock formations and scenery are very unique. I don’t think any other place even comes close to matching this beautiful scenery. Sure I’ve seen some great views in the Unitas, the Rocky’s and even the Andes in South America, but the formations here in the National Park (I wouldn’t even call them mountains) are individual pillars that stand alone in the canyons, and many have trees and other greenery growing all over them. A very cool sight to see.

I flew into Zhangjiajie (pronounced Zhan-jaw-jay) and caught a taxi to the hostel where I stayed for the next 5 days. I was recommended a hostel and it was great, the host Victor was awesome in helping me plan out every day, what to see and how to get away from the crowds, He was great. This was one of those places (along with Xi’an) that I wish I could have stuck around for another week. I came to really like both cities. Both are places I even wouldn’t mind living in. The city is very small, and is surrounded by mountain, rivers and one lake. The national park itself is huge. I spent a solid 3 days in the park, but could have easily spent more. It is so spread out that you pick an area to visit and then spend the day hiking (walking up stairs) and exploring on your own. The first day I trekked up and was basically alone until I reached the top. Along the way are various outlooks that showing these towering pillars that surround you. They really are mesmerizing. Once on top I was greeted by thousands of Chinese tourists who had opted to take the cable car to the top. I walked around a bit and explored an old temple on top, before rounding a corner through the tree to see what? A McDonalds! There is a freaking full blown 2 story McDonalds on top of this Chinese Mountain in the middle of nowhere. Of course it was packed, and I couldn’t resist either and bought a large fry. After all I had been hiking for the past 6 hours. I made my way zigzagging around and ended up at an outdoor elevator. Wanting to make the park more accessible to tourists, the Chinese government let a private owner to build this elevator that drops of one of the cliffs and ends up at the parking lot. As I’m buying my ticket I turn the corner to see a total American dude. Tall, blonde hair and a beard. It was weird because it was late and also because he was in overalls and carrying a wheelbarrow full of tools. Turns out he is from Michigan, and he builds and maintains these elevators all over the country. He’s been here the last 3 years. He gave me a ride back to town, as it would have been a couple hour walk at least. The next 2 days were pretty much the same. I picked an area of the park and set out. Each day was something similar, but very different. Both days I picked remote areas so I was pretty much walking all day alone, which was awesome. No noisy Chinese tourists with their massive cameras, and bulging walllets. I was able to go at my own pace, and explore every place I wanted. It was great. The second day I was able to hike up on top of a couple of these pillars as the Chinese have construted some very sketchy ladders and bridges letting you get to the top. Of course almost every place has a couple of “photographers” that are willing to take your photo and print it out on a cute little laminated card to help you remember the occasion……Yea, no thanks. After each day of hiking and arriving back at the hostel I was pretty beat. I definitely needed new legs, and probably a new brain, because I did it again each morning. It was actually a nice workout and great stop on my trip.