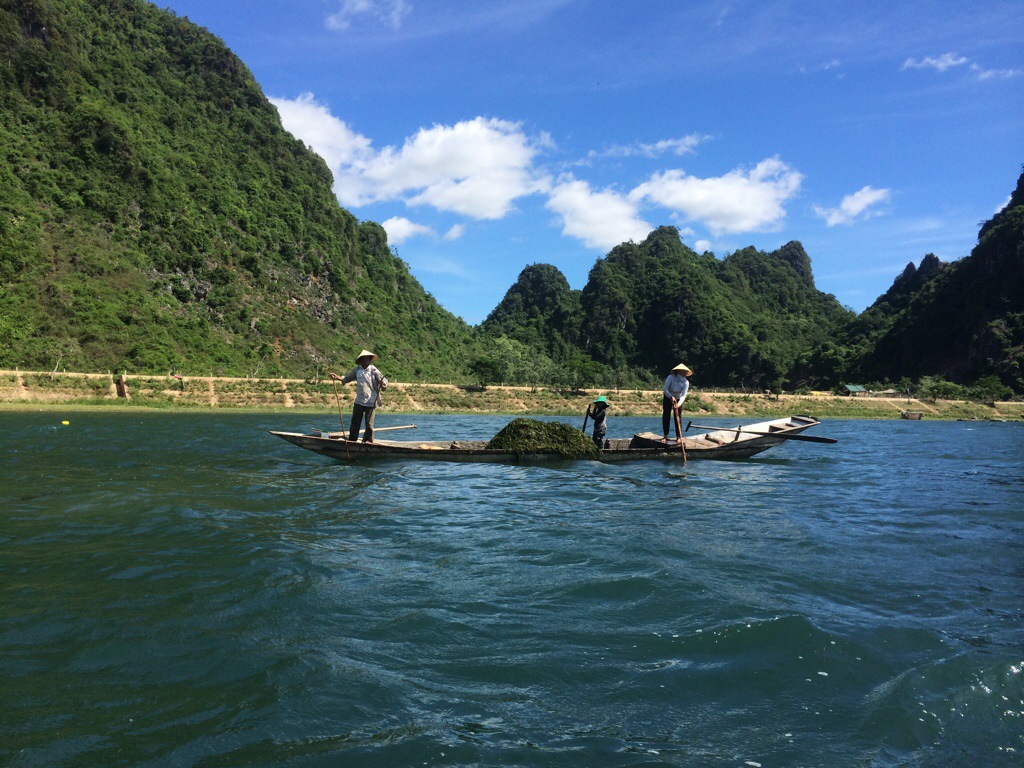 Phong Nha Ke Bang is a large national park located just about in the middle of Vietnam. After an adventurous 12 hours bus ride from Hanoi, we got kicked out in a daze just after 6am. I grabbed a taxi with some dudes form NewFoundLand, and we headed about an hour inland to the park. We booked a tour for about $20 that took us to the Phong Nha Ke Bang Cave in which we boarded a boat and floated down. IT was really big and has a river that flows through the entirety of the cave which is about 9km long. We grabbed a surprisingly filling lunch and headed out to my favorite part of the day, Dark Cave. It was about another hour inside the park, and one that not to many people go to. Once there, we Kayaked down a river to the mouth of the cave. Leaving them behind, we put on our helmets and headlamps and started the trek inside. We probably climbed close to 2km deep. There was a flowing river which we trekked through up to our knees, but we turned off into a side cave and begun to trudge though knee deep mud. This isn’t like the typical Centerville mud at home. It was thick, and sludgy, and gooey. Almost like cornstarch when you mix it with water in a bowl, or something like really ticker pudding. We finally got to the end and there was another group, not surprisingly a mud fight began and not before long we were completely covered head to toe in thick, goopey mud. We laid around in the mud pool for a bit before trekking back out to the river to swim around and wash ourselves off. It was actually one of the cooler and more unique things that I’ve done on the trip. After getting back to town, I caught a tour bus back to Doing Hoi, and then flagged down another bus that was headed to Hue, about 4 hours away. I had to be in Hue the next morning because I had a flight out to Ho Chi Minh City (Saigon) to meet Mother and TJ as they were flying in the next night.

I just hung around Hue for the day, its an interesting older city, but not a whole lot to do. I caught the last flight of the day after being delayed by two hours, and ended up staying with a couch-surfer I contacted the night before.